on starting this blog: a personal reflection 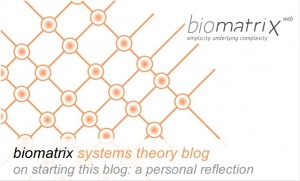 During the last few months, I received an increasing number of requests from students, researchers and institutes in different parts of the world about Biomatrix Systems Theory and its application to their specific issue of concern. Instead of answering to one person what could also be of interest to others, a starting this blog on our webpage would, of course, make sense.
For years, students, colleagues and friends have urged me to start a blog. I have resisted this for two reasons: the potential work involved in editing, responding, adding new information and keeping it interesting. But deep down, the second reason is the overriding one: dare I write publicly outside the safe and ritualised scientific genre? Dare I bare my soul and voice opinions that run against the dominant paradigm and current fashion (yes, I use this word deliberately) that permeate business schools (my academic context) and which are often politically incorrect?

No, I am not worried about my personal reputation. Hopefully, my spiritual praxis allows me to deal with that. Rather, my fear is that personal opinions and my emotions could slip in and override a more impersonal interpretation of Biomatrix Systems Theory and Methodology (as far as that is possible) and thereby damage its credibility.

Put differently, the generic principles associated with a systems theory and their application in a systemic methodology are content neutral in the sense that they are applicable to all systems. Their specific content differs from system to system. For example, systemic governance distinguishes between form creating, form maintaining and form destroying governance and speaks of balancing them. What this means in the context of a specific system (e.g. a biological or technological function, an education system or the economy) is determined by the observer of the system (e.g. in biological systems) or by the system itself (e.g. in social systems). While the methodology asks generic questions (e.g. what is or should be form creating governance in your system?), in my blog I go beyond the neutral question and give an answer, according to my personal opinion. And I may get it wrong, especially if it concerns a system I am not an expert in (e.g. my comments on the economy). In short, please do not throw out the baby of Biomatrix Systems Theory and Methodology with the bathwater of my applied opinion.