Seven forces of system organisation is a comprehensive and theoretically sound framework for understanding organisational development, management and change.

This framework allows managers to diagnose deficiencies in the development of their organisations and provides the principles according to which these deficiencies can be remedied. It also allows managers to contextualise the different change initiatives in their organisation and to assess their relevance in the context of the organisation as a whole. Most importantly, it provides a holistic and synergistic understanding of organisational functioning appropriate for the information age. After completing our module on the Biomatrix systems approach to organisational development and change in their MBA course, delegates often remark: “Now we understand, how everything we learned during our MBA studies hangs together.”  To transmit such understanding is our aim.

It is our experience that if the various widely-used management approaches and tools are placed into a systemic context, their effectiveness will be enhanced. We briefly mention some of the most common management models and approaches, however, it is not our intention to explain them in detail. Our aim is to contextualise them within the systemic framework of the biomatrix. We would like to make managers aware of where each approach fits in terms of systemic organisational development.

Some managers hold the view that management models and approaches are “fads” that go in and out of fashion and replace each other in rapid succession. We hold the view that each has an appropriate niche within which it makes a useful contribution. Biomatrix systems theory provides a framework within which these niches can be assessed.

On the basis of this framework, managers will be able to diagnose shortcomings within their organisation and select the appropriate interventions, using experts in that field. The manager has the responsibility of holding the meta-view to ensure that each intervention is coherent in terms of all seven organisational forces.

As discussed in the video, according to Biomatrix systems theory one can observe seven organising forces within a system. Each force shapes the system in a specific way. In their interaction with each other, these forces are responsible for shaping the system, determining its behaviour and destiny.

The seven forces are environmental relations, ethos, aims, process, structure, governance and mei (i.e. substance or resources of the system).

Each of the seven forces plays a different, albeit equally important role in the development of an organisation. 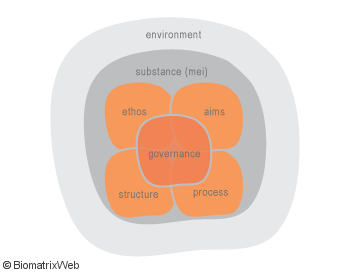 Both points of organisational development are discussed throughout the Biomatrix programmes.

The following key thoughts of Biomatrix systems theory are discussed in the modules of the Biomatrix Management Education Programme and form the backdrop to this framework:

To learn more about Biomatrix systems theory in general, visit biomatixtheory.com and browse the free presentation.