Systems thinking fragmentation: In spite of more than 50 years since its inception, the impact of systems thinking in the universities I have observed and interacted with is disappointing. It has made an impact on some disciplines and even improved some interdisciplinary cooperation, but did not have the expected trans-formative effect on research and teaching that could arise from its trans-disciplinary application. (If you have a different experience, please share it with me.)

A major reason for this is probably the fragmentation of this body of knowledge. As a worldview, systems thinking is derived from a conglomerate of concepts, models and tools developed by different thinkers associated with general systems theory and related bodies of knowledge such as cybernetics, operations research, complexity theory, chaos theory and field theory, amongst others. Also, different disciplines have developed their own interpretations, often using a different language for the same concepts and applications (e.g. some concepts and methods of systems thinking are renamed from those of cybernetics and much of complexity theory is renamed systems thinking). Although these different bodies of knowledge share the same or similar concepts, they are not integrated and do not form an internally consistent theory, either as a whole or sometimes not even as a part.

Depending on the preference of the lecturer or programme manager (e.g. of MBA programmes), one systems (or related) approach is preferred to others, often uncritically (or with lack of experience) as to their effect on change management. For example, I have a few times been approached by students who were guided to apply the wrong systems approach for their topic and “got stuck” in their research.

Other programmes discuss a selection of approaches, treating them as of equal importance, even if different from each other. For example, I have encountered the demand by a programme manager to teach different systems approaches and allow students to make their own choice as to which one they would like to follow. Besides prescribing some diverse reading, I did not comply with this request, based on the argument that the Biomatrix Systems Approach is a meta-approach that synergises (i.e. integrates and contextualises) the concepts of most other approaches. The intellectual effort involved took the members of the Biomatrix Group several years and produced four PhDs in the context of a multi-disciplinary PhD programme. Students of a systems thinking module cannot replicate this effort in a few weeks plus apply it in praxis to their specific action learning project.

The attitude of treating each systems approach and even some tools and concepts as equal and stand alone approaches and not understanding that the integration within a larger whole (i.e. meta-systems approach) would create a synergy between them, perpetuates the fragmentation of systems thinking. It always amazes me that the systems community speaks about the whole being greater than the sum of its parts when teaching systems thinking without applying this insight to the body of systems thinking knowledge itself. By comparison, other scientific disciplines integrate any new concept into the larger body of discipline specific knowledge.

The Biomatrix Group strives for a theoretical integration. We grapple with any new concept we encounter, comparing it with apparently related ones (in terms of content, not necessarily name) and – if it adds new insights – we integrate it into Biomatrix Systems Theory (and add the author to the list of intellectual giants on whose shoulders we stand). From a theoretical point of view, our strength is development of coherence and integration, besides also having made some unique conceptual contributions.

From a methodological perspective, we also strive for integration of tools, methods and approaches developed by us and other systems thinkers. My personal yardstick is: can the methodology facilitate the dissolving of global poverty in terms of content (i.e. facilitating the appropriate redesigns of systems and the development of comprehensive and feasible strategies) and change management (i.e. facilitating the alignment of key stakeholders around the design and the implementation of each strategy by the relevant stakeholder)?
We are grateful to the peers who work with us, both in fleshing out detail in theory and methodology and who apply the theory and methodology in praxis and share their experience with us, thereby contributing to the continuous development of this body of knowledge. We are also happy that an increasing number of systems thinkers, disillusioned by the fragmentation of the field and its difficulties regarding application, embrace the Biomatrix Systems Approach, because it makes sense to them and works for them in praxis.

Ultimately, Biomatrix Systems Theory was co-produced by all systems thinkers we came into contact with – personally and through our extensive reading. Tracing a specific concept back to who originated it is probably more difficult in systems thinking than in other scientific disciplines (in our academic publications we try our best to do so specifically, while in our popular presentations we acknowledge the list of names of thinkers whose concepts are included). For example, who is to be acknowledged for originating the concept of the containing systems hierarchy? Was it Koestler, who wrote a book about it? Others would argue that it is a universal experience that societies contain individuals and organisms contain cells. One may even dispute that there is something like a truly “original” idea. Someone, somewhere thought and wrote about the idea, perhaps in a different context, even if others work with it, embellish and add to it. 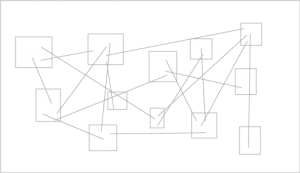 In conceptual reality, systems share generic principles and patterns of organisation and behaviour, while their application in physical reality leads to unique outcomes. In physical reality each system is different from any other. There was never an application quite like the current one and there will never be one that is exactly the same. This has profound implications for philosophy of science. (See also reflections on Benchmarking.)

Ultimately, I think, the challenge of systems thinking lies in application. It is nothing less than facilitating the transformation of our social systems in order to dissolve humanity’s most serious problems and ensure its sustainable development within the sovereignty of nature and with respect to other forms of life.