The development of a system is co-produced (or co-caused) by co-factors inherent in the system itself, as well as by co-factors from its outer and inner environment. Likewise, problems within and across systems are co-produced. Systems thinking emphasises that there is no single causation but that everything (e.g. every “thing”, system, issue and problem) is the result of multiple causation arising from various co-producers.

Note: Co-producers are systems that contribute mei (matter, energy and information). They are stakeholders of the system and their contributions are referred to as co-factors. The terms co-causation, multiple causation and co-production can be interchanged.

Biomatrix Systems Theory emphasises that co-production arises from three levels: the system itself (including its various parts), as well as from systems in the outer and inner environment. For example, a person’s life is co-produced by him or herself (e.g. mental and emotional constitution and effort), by the state of the organism, cellular functioning and genetic predisposition of the inner environment, as well as by external circumstances. Likewise, an organisation is co-produced by the organisational self (e.g. its ethos, aims, structures and support systems), the contributions of its staff members (inner environment) and its external environment (e.g. market developments, stakeholder contributions, societal and planetary conditions).

The co-factors influence the development of the system, including its behaviour, the resources it has available and the outcomes it achieves.

One cannot understand a system, issue or problem, unless one understands its co-factors.

Single cause thinking is a major co-factor in a change manager’s failure to understand and solve complex problems and generate a more desirable development for the system they want to change.

By asking “What else co-produces the development or problem?” one shifts automatically into systems thinking mode. 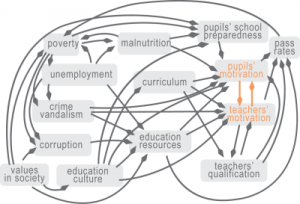 The various co-factors associated with the development or problems of a system also impact on and co-produce each other. A change set in motion in one part of a system ripples through a system and into its interconnecting systems, co-causing continuous change.

This flow of impacts is depicted by a systems dynamics model. The figure illustrates the impacts between some co-factors associated with education in developing countries. A system analyst can “walk through” the model and follow the flow of change.

The outcome of an impact is not predictable, as different systems tap and respond to an impact differently. For example, an unmotivated teacher is likely to demotivate the pupils. However, some pupils could also refuse to “tap” the impact and remain motivated.

The ripples of change will also return to the system from which change originated, either via other systems or directly between two interacting systems as circular causation, analogous to the chicken – egg paradox.

Vicious circles are broken if one party does not retaliate (analogous to “turning the other cheek”). This allows a vicious circle to be turned into a virtuous one.  For example, South Africa’s peaceful transition was due to non-retaliation for the evil perpetrated by Apartheid.

The interaction in a vicious and virtuous circle gets reinforced, escalates and can easily spin out of control. It is also difficult to determine the beginning of the interactions and who started it.

The development of systems and problems experienced by them are the result of dynamic change.

Because of mutual impacts, solving one problem or developing one system in isolation of others is ineffective. Instead, decision-makers need to adopt a systemic worldview and systemic problem (dis)solving methods. These consider impacts and involve stakeholders in co-producing win / win based outcomes for the interacting systems.

A system can display properties (or qualities) which are not inherent in its co-producing parts. This is called emergence. For example, water displays the qualities of wetness, liquidity and viscosity. They arise in the interaction of, but are not inherent in, the oxygen and hydrogen atoms. During team work, new ideas emerge that none of the team members had before. Through its interacting parts a car drives, while none of its parts can drive.

For example, the same team can produce harmony and creative output (synergy) or conflict and chaos (dissynergy), depending on the nature of the interaction of its members.

Emergence is a key concept of systems thinking. It is the reason why ‘the whole is greater than the sum of its parts’.

Systemic change management aims to produce desirable emergence in the system it wants to change.

Achieving this requires a shift in worldview (towards systems thinking) and a systemic methodology. 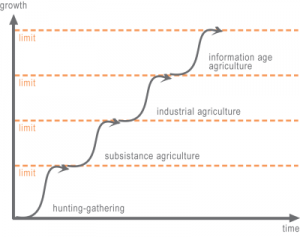 A system can grow until it reaches a limit of resources (mei). If the system wants to grow beyond the limit, it has to develop in different ways. Because every system is part of other systems and also contains other systems, it is limited by the possibilities inherent in those other systems. For example, the amount and quality of grazing land limits the number of animals that can be sustained by that land. The physiology of a person imposes limits on how much he or she can work before falling asleep. Climate change is the result of exceeding the level of greenhouse gases that sustain the evolved ecological balance.

A limit to growth is also referred to as carrying capacity. It is a measure for the amount of growth that a system can sustain at a specific level of development.

If a system wants to grow beyond its limits, it needs to develop – i.e. use the available resources differently or harness new ones. For example, an area of land can sustain a certain number of persons as hunter and gatherers. If the same land is used for subsistence farming, it can sustain more people. Industrial agriculture can feed an even larger population and information based agriculture (e.g. computer controlled, genetically engineered) a still larger one. Each stage of development requires technological development as well as different capabilities and ways of organising.

relevance
The survival of humanity depends on understanding the limits to growth inherent in nature and on developing sustainably (i.e. within those limits).

relevance for the change manager
The existing human and technological resources of an organisation pose a limit to the continued business growth. If an organisation wants to continue to grow and develop, it needs to expand its internal capacity accordingly. Thus business and organisation development go hand in hand. 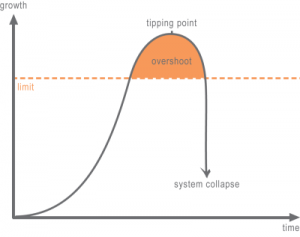 Exceeding a resource limit is referred to as overshoot. Once a tipping point is reached, the collapse of the system exceeding the limit becomes inevitable. For example, if more animals are allowed to graze than the land can sustain, overgrazing occurs. As a result, no animals can be sustained in the future. Overgrazing of large areas of land (as is the case in many African countries) also affects other systems negatively. It can lead to desertification. Water will become scarce. Without vegetation to absorb and hold the water, groundwater levels decrease and springs dry up. The rainwater runs off on the surface taking valuable top soil with it making rehabilitation of the land impossible. Poverty will increase and with it disease and a variety of social, economic and political problems.

In some instances overshoot may be contained if the system has safety margins built into it. However, continued or increasing overshoot may lead to a tipping point after which the excess cannot be contained but leads to the collapse of the system. For example, a person can lead an unhealthy life for some time before disease and even death occur – apparently suddenly.

Analogous to the straw that breaks the camel’s back, a tipping point can be reached with a relatively small increment (e.g. it takes only a few animals too many to overgraze a piece of land).

relevance
While it can take a long time to build up a system, it can be destroyed rapidly and irretrievably.

relevance for the change manager
Systemic change management should be directed at establishing and maintaining the sustainable development of a system.